Fate and the TSA

For some years now, my darling husband has been a target of the TSA. Even though he looks like an average guy; somehow he is always chosen without any fail to proceed through further examination of some type .

Perhaps it is because he is not so average. A guy who is comfortable in pleated pants and button down shirts. The well-trained TSA personnel recognize that he does not drink and does not smoke; thus making him a threat to normal society.

Today arriving at the Tampa airport airside A; we were immediately separated. Not sure exactly who got which lane until I was entrenched in the process that I realized that I was in the ‘fast pass’ lane. My poor husband was, one again subjected to further screening. 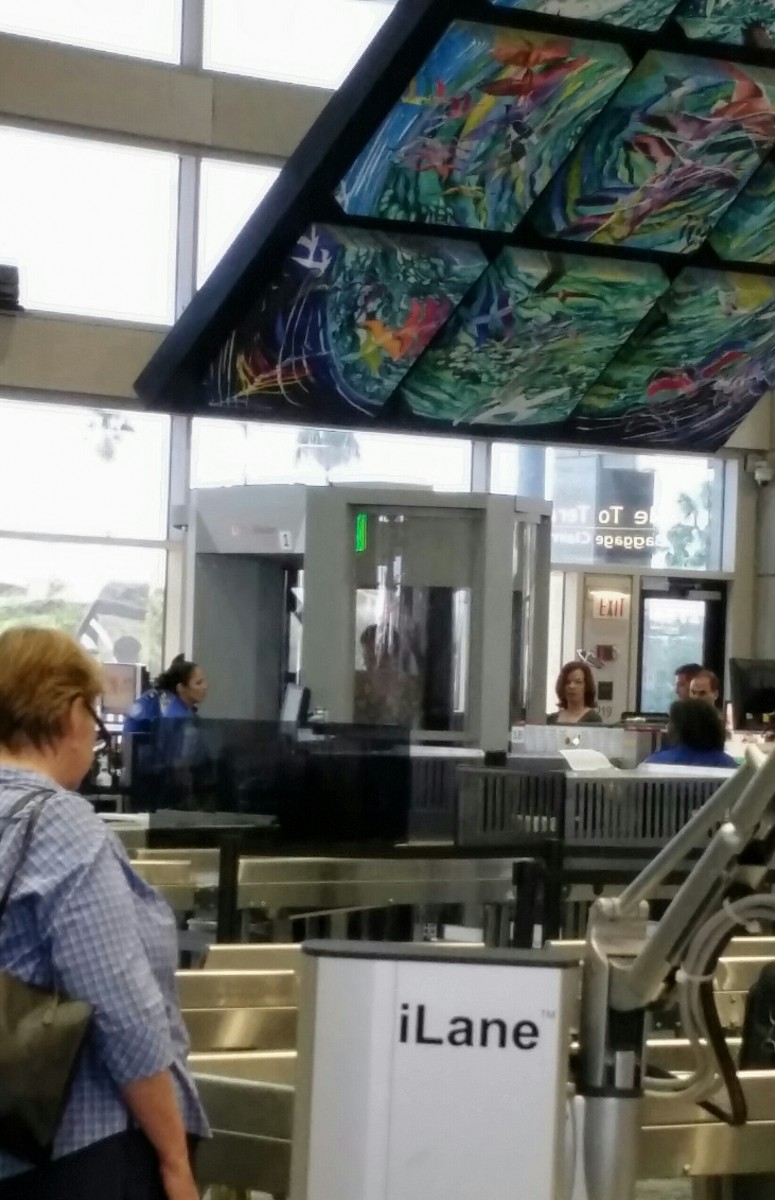 At least this time, he was labored with carefully selected items for his bags… No electronics, no liquids and simple clothing.

But since he is the ideal travel companion, he takes it stride and allows me to chuckle. 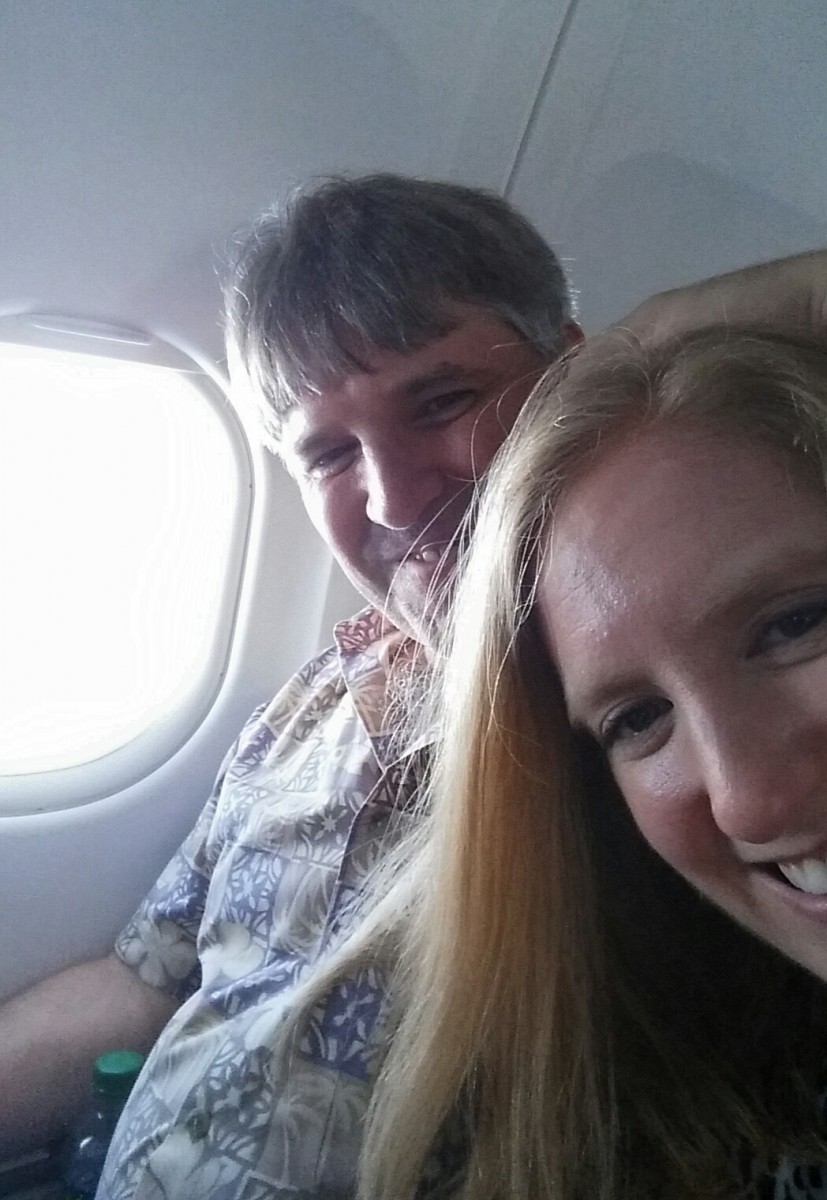 But, we made on to the plane and I did not freak out too much. So, life is good.

On to Boston for the week…

Per our standard flight routine I just got to sit down after the ‘extra secure’ TSA screening.  It is nice to be loved.

We are sitting in departures for Jet Blue at Tampa International Airport waiting for our first flight to Boston.  Part of our bungalow house is being dismantled by contractors while we are away, and possibly re-mantled before we get back, but I am not expecting miracles.  Our perpetual construction will end, but not quite yet.

Boston.  I know really nothing other than sketchy school history, more daydreaming than education when history was involved, about the city but everyone we have told of our trip seems to be excited for us.  The Tea Party, the real one, happened there, there is a harbor and some sports teams, who knows what else.  Kinda going at this one blind because we have a purpose and it sounds like there are so many things to do that we will need to return some day.  I think of this as a trial run.

Our purpose is to attend the 24th First Annual Ig Nobel Prize Ceremony at Harvard University.  ( http://www.improbable.com/ig/2014/)  We have watched it live streaming on YouTube and decided to make a vacation of it.  This year’s ceremony is on Thursday evening.  Visit the link and watch us.  We will be front row and center.  This year’s theme is ‘food’ so Briget and I will be representing the food chain.  Me in my zebra stripped shirt and Briget in leopard print.  To send the point home I may be in my hamburger hat too. 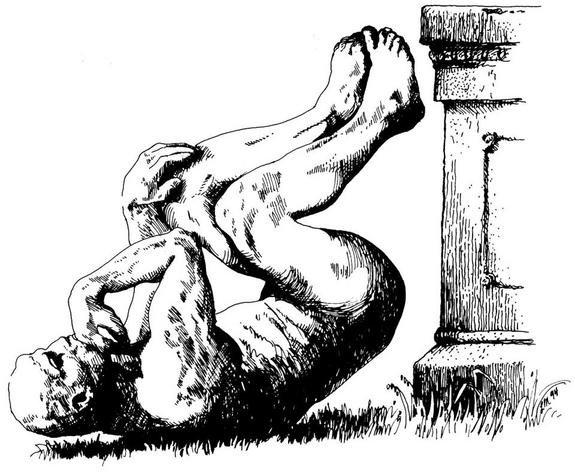 Ig Nobel Prize - Science that first makes you laugh and then makes you think.

For those not science geeky enough to already know about the Ig’s.  The prized are given to those who have published studies that first make you laugh and then make you think.

We look forward to Boston and an exciting trip.

I always wanted a DeLorean.  My fondness of the DeLorean car does not come from the movie ‘Back to the Future’.  It comes from being in the Buick showroom in 1981.  My parents were looking for a new car, when, there it was in all its stainless steel glory: the DeLorean. 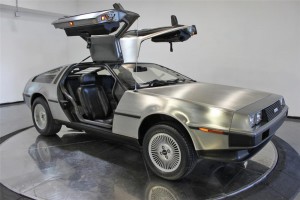 The gull-wing doors were open.  I gravitated towards it.  I sat in it.  My dad wandered over and my needling began.  I begged my father with all the might this ten year old girl could muster: “pleeeasssse, let us get it”.  I said it over and over (and over again).  I offered to do extra chores around the house.  I would wash it and make sure the inside would stay clean.  I rationalized that our family of five would be just fine with this.  I offered to be the one who would *always* sit on the narrow hump in the backseat when we all traveled together (and not complain about it).  No go.

We ended up with the Buick Skyhawk.  In gold.

So, it has always been kind of a pet dream that I would, one day, have a DeLorean.  But, as so many other things in life go, other priorities were in put in front of that day dream.  Other practical things, like probably what my father was thinking at the Buick dealership three decades ago.

When working on our main bathroom in the house, we had to decide on the color grout for the floor tile.  We had the tile for ages and we were finally at the stage to install it.  The chosen tile could really go with several different grout colors: brown, grey, white even.  When narrowed down to the grey hue, the choice became easy: 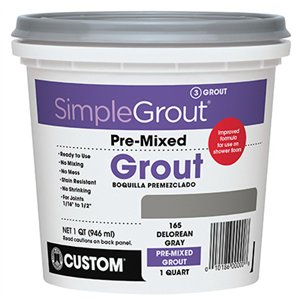 I finally have my DeLorean.

Several years ago, on a road trip exploring the south eastern United States, and routing our trip through places that our AAA guide mentions and we think might be fun or interesting, we passed through Dayton Tennessee.  Now you might remember Dayton from you history classes or from some mention of it when people bring up evolution.  Dayton was where the trial took place because a teacher, John Scopes, was accused of teaching human evolution in a State funded school.  This was in 1925 and the trial made major news all around the world.

On our drive toward the remote town of Dayton, Tennessee we noticed that the outskirts of the town had graveyards.  Lots of graveyards.  So many that we really started wondering about the town.  Now we like a good cemetery and have visited several of them on our trips, but the quantity was alarming.  Remember, this has never been a big town.

As fate would have it, we took the wrong fork and accidentally passed the town.  We were one block off and didn’t notice the town.  So we stopped at a convenient store to ask where the old courthouse was located.  There was an old pickup truck parked outside.  Walking into the store felt more like walking in to someone’s living room.  Someone who liked to hunt and whose wife didn’t mind having his buddies hanging around.  A living room where people get quiet when you walk in the room.  I asked for directions and the guy at the counter explained how we had missed the main thoroughfare.  Just before I went back to the car I mentioned, “There sure are a lot of graveyards around here” and got the reply, “no more than normal.”  I was suitably creeped out.

When I hopped back in the car I relayed the information to Briget, she too was creeped out and we headed back toward town and the Old Courthouse.

Now that we were on the main strip we saw that there were few businesses that were not real estate agents.  Startlingly few.  There were more than your average number of graveyards surrounding the town and lots of real estate agents within the town.  We postulated that the agents keep killing off residents so they can get commissions for the same property over and over again.  We’re not conspiracy theorists, but this was too good to not speculate on.  Either way, it entertained us.

The Old Courthouse was enjoyable, and very informative, but nothing beat the single sheet of copy paper folded to be a brochure that highlighted important places in the town.

The last started with places like the Old Courthouse and the hotel where the reporters stayed during the trial.  From there it started seeming like it was reaching a bit.  All I remember is that one of the last entries was something like, ‘None of the original structure still stands but part of the fence wall on the side was standing at the time of the trial.’

These things may make light of the day but I have to say that the trip was worth it and memorable, if for no other reason than the history that was made there.  We had a great time, had plenty to talk about, and the little town of Dayton has stayed in our minds as one of the highlights of our trip.  We have even discussed going back!

After our trip things like this Get Fuzzy comic really tickle or senses.

A Return to Prague

A wonderful trip is in the works!  Chris and I will journey down the Danube with my mother and aunt, in December.  Before we board the ship in Budapest, we will spend a few days in Prague.

Legend says that if you make a wish while touching this plaque on the Charles Bridge, it will guarantee your return to Prague (and grant your wish). 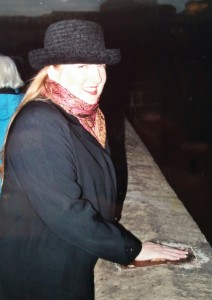 October 2005:
Wishing a return to this fabulous city!

We love traveling via the London Tube. It is wonderfully easy to navigate the city, see interesting people, and really take in the local lifestyle.  This trip to London, we purchased our first Oyster Cards.  Having an Oyster Card-a more permanent ticket over the one-time use paper card-makes me feel like we belong just a little bit more.  I then went whole-hog and purchased a holder for my Oyster Card… 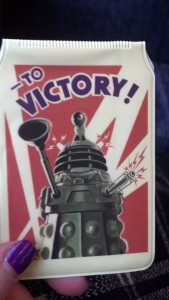 The London Tube provides us with sensory overload.  The sounds of whizzing trains, musicians busking, and loud-speaker announcements about minding a gap.  Then there are the sights.  From the people to the many different advertisements on all surfaces, visually, there is never a dull moment.  From the posters on the walls, we learn about current events such as new books published, concerts coming to town and movies set to premier.  So one day, we encounter this… 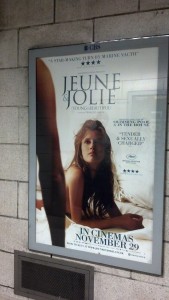 Stepping off the train quickly Chris nods to this poster and says, “I’d see that.”  “You don’t even know what that is” I smartly say knowing that he knows no French words.  “Doesn’t matter” he says keeping pace with our fellow commuters.  Doesn’t matter?  Doesn’t matter?!  Really?  And thus the marathon philosophical discussion began.  And, ultimately, it just mattered that she is young and beautiful; as the poster tells us.

A few days later, we made our way to the West End; another favorite spot for us.  The number of theatres in this tiny space of the city is incredible.  On our way to a show, we pass by… 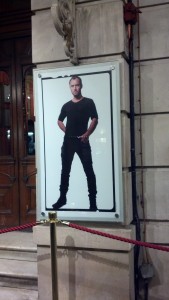